Past meets present with the brand new VOX Superbeetle, a herald back to the Golden Age of Rock and Roll with its iconic VOX mini-stack design and vintage VOX tone. Featuring Nutube technology, an open-backed cabinet design, and built-in Tremolo and Reverb effects, this amp is designed especially for fans of the British Rock heritage - and it looks fantastic to boot!

An Iconic Design Reimagined for a New Generation

Based on the iconic VOX AC100 stack set, including the chrome frame stand, the VOX Mini Superbeetle really stands out as an homage to this amp that was made famous by a certain Fab Four from Northern England.

Developed in close collaboration between KORG and Noritake Itron, NuTube is an all-new vacuum tube that's been developed to offer you all of the benefits afforded by vintage valve technology, but in a much-smaller, more durable, and more reliable package.

In the VOX Mini Superbeetle, this NuTube technology helps to reproduce the tonal character of the legendary VOX AC30, with those recognisably chimey, sparkling tones that have been present in the mainstream music scene since the 1960s. Not only that, but the Overdrive and Tremolo sections of the amp are powered by this new technology too, and are complimented by the built-in digital reverb, all of which helps in dramatically improving your tone-shaping capabilities.

A Must-Have for British Music Affocionados

With a sophisticated sense of design that's arguably unmatched by any other amp manufacturer, VOX amps often resonate strongly with fans of that vintage British Invasion sound. The VOX Mini Superbeetle manages to emanate the spirit of this legacy in both looks and sound, and will no-doubt bring joy to the life of anybody who owns one.

And at such a low price, who can argue? 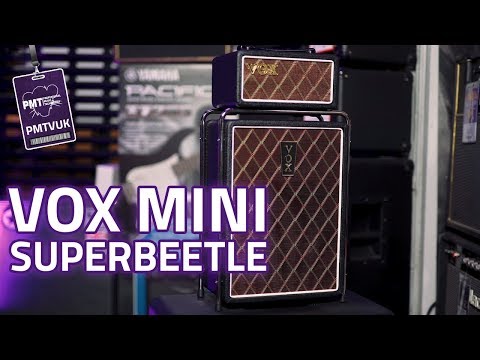