Ever the innovators, those clever chaps at Electro Harmonix have gone and produced a blinder of a guitar pedal. Fully capable of producing the kind of sounds and effects you'd normally have to link several expensive effects units together to achieve, you can now do it all with the Canyon, a Delay/Loop pedal that comes in a tiny package but packs a hell of a punch.

A Collection of Awe-Inspiring Effects!

Well, as you'd expect from a pedal that is advertised as a Delay/Looper, it adds some Delay effects and can loop your playing. Sounds a bit... well, the same as dozens of other pedals out there, no? That's where you'd be wrong - the secrets housed within this little box are manifold! Before I go into that too indepth though, I'll briefly discuss what the different controls do.

First there's the FX LVL Knob which, as you could probably guess, controls the output volume of the delay effect (turned down into the lowest position ensures that you just get a dry signal through to the amp. Turning the control upwards increases the effects volume, and once you get past the 2 o'clock point the dry signal volume increases too with the signal being solely delay once you're at maximum. (Also, in S/H and Loop modes the dry signal remains at unity volume, even when the FX LVL is full... but more on those modes later).

Next there's the Delay control, which... well, controls the delay time, from a minimum position of 5 milliseconds to a max of 3 seconds.

Then there's the Feedback control, which allows you to state the number of repeats present in the delayed signal (the higher you set this to, the larger the number of repeats). In S/H mode though, this controls the "pluck detection" sensitivity, and in LOOP mode it controls just how much of the existing loop is preserved when overdubbing.

The Mode knob is where the real fun begins though. This is an 11-position rotary switch that activates one of the following modes:

The TAP/DIVIDE Switch controls (believe it or not) the Tap Divide Setting. You can use tap tempo to set the delay time, with this botton controlling the division of the tapped tempo. The LED indicates which Tap Divide setting you are currently on (Red for quarter notes, orange for dotted eighth and green for eighth).

The Footswitch is what's used to switch the pedal between bypass and effects modes, with an LED indicating when the effects mode is active. However you can also set the delay time by simply tapping the footswitch at least two times.

And finally, the Tails Switch allows you to choose between allowing delayed echoes to continue to repeat or stop immediately once the pedal is switched to bypass. This small side switch is on the bottom of the circuit board, and is accessed via the pedal's bottom cover. When set to ON the echoes continue to repeat post-bypass (the number of which are controlled via the Feedback knob), but when set to OFF all repeats will cease as soon as to bypass switch is pressed.

If you'd like more information on the Electro Harmonix Canyon, contact our Online Sales Team directly - they're always more than happy to help. 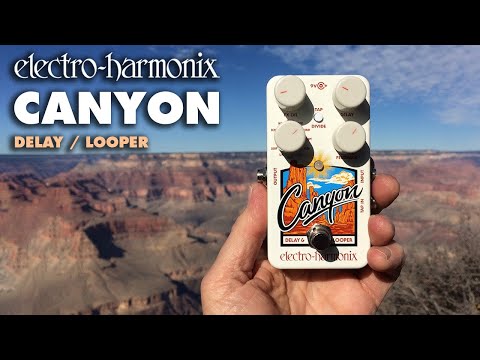