When you trigger sample phrases, the LEDs remain lit to show you which pads are in play and which are not. In addition, the LEDs change illumination strength according to audio-level activity (similar to level meters on a mixing board). The high-contrast red divider lines help you see the pad zones clearly onstage.

The SPD-SX has three multi-effects units onboard: one master unit and two units that are assignable per kit. The master effects engine lets you perform in real time like a DJ using the dedicated front-panel controls. Get your hands on the filter, delay, short looper, and user-assignable effect — all of which can be creatively adjusted with the four front-panel buttons and two control knobs.

The SPD-SX’s generous internal memory (4 GB) lets you store and carry your entire sample library inside. With no external memory required, you can house approximately 720 minutes of audio (10,000 files) at 16-bit, 44.1 kHz, mono. The built-in USB ports let you directly import audio files from USB flash memory. The bundled SPD-SX Wave Manager software app lets you import audio files directly from computer via USB, assign the samples to each pad, and organize the thousands of samples efficiently. 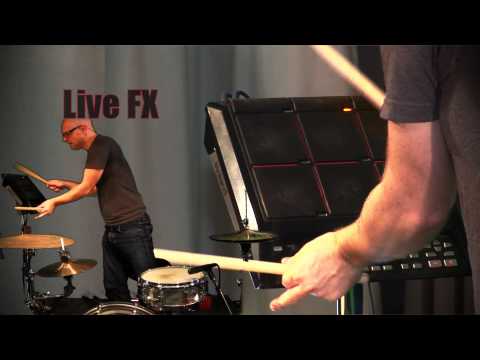