Electro-Harmonix Triangle Big Muff Pi V1 - a Vintage Reissue of The One That Started It All!

Back in 1969, EHX founder Mike Matthews developed what would soon become the world's best known fuzz pedal: The Triangle Big Muff Pi - the pedal that helped forge a musical revolution!

EHX's Most Famous Pedal is Back!

With the original pedals selling for (quite literally) hundreds of £'s, the reissue will come as a breath of fresh air for those of you wanting those vintage, creamy fuzz tones with violin-like sustain, at a fraction of the price.

Having been seen on countless stages across the world during the past five decades, the Big Muff has helped to shape the tone of some of the music industry's most recognisable guitar sounds. From King Crimson, The Carpenters, and Pink Floyd, to The Smashing Pumpkins, Korn and many more, the Big Muff has left its mark on the world in the best possible way.

The control layout on the Big Muff has been largely unchanged this past fifty years, with the occasional toggle switch or control knob being added for further sound-tweaking. With the EHX V1 Triangle Big Muff reissue though, it's back to basics: a simple On/Off toggle switch, with controls for Volume, Tone and Sustain.

The Triangle Big Muff Pi is brand new to 2018, and is available to order at PMT Online and In-Store now! 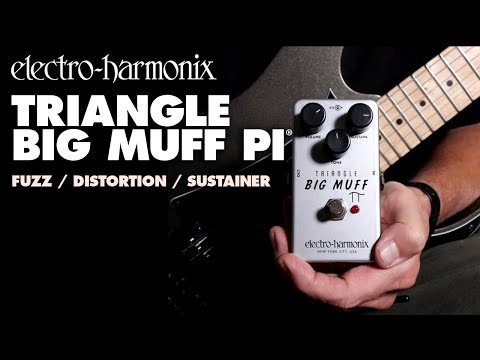