Leading the way for a new breed of digital mixer the TF series from Yamaha will answer the prayers of venues, studios and bands operating a small to mid size rig, with D-Pre sound, built in audio interface and legendary Yamaha build quality. The main focus is on professional live sound TouchFlow Operation, offering the kind of intuitive interface that has made Yamaha the gold standard for so many engineers with their LS, PM and QL consoles. The TF mixers can wear many hats from tracking right into your DAW, recalling scenes for sets while GainFinder and 1-knob Comp & 1-knob EQ allow a faster workflow for engineers at every level.

At the core of the TF mixers is TouchFlow Operation, developed from technology used in Yamaha's high end mixers. Instantly familiar to the users of these famous mixers but built around the same core concepts that will be familiar to users or analogue and other digital mixers.

Along with the core interface Yamaha have spent a great deal of time with working engineers to ensure all the details are taken care of. With colour coded channel strips, new Gainfinder technology, QuickPro Presets for popular live sound mics as well as plug and play compatibility with iPad/iPhone for music playback. Of course all this technical wizardry doesn't count for much if the underlying sound isn't great, thanks to D-Pre mic preamp design that isn't a problem, along with studio standard SPX effects engines. Offering a classic analogue console sound alongside a plethora of digital mixer features that make getting great sound easier. 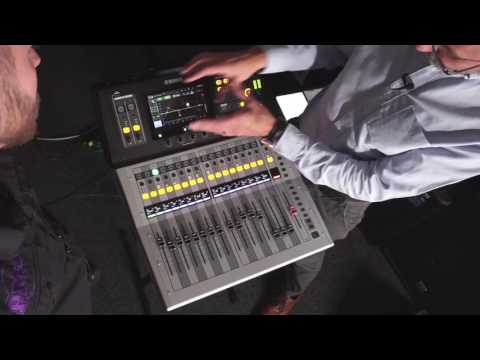