Two Notes Audio Engineering have a clear vision, and we're pleased to be able to share it with you. Just a few short years ago they set out to design and build a range of pedals that would essentially leave more conventional tube amplifier systems redundant, being replaced almost entirely by your pedal board. With that in mind they created a premier line of tube preamplifiers with simplistic names, one of which is known as Le Bass.

Lightning Fast Response With A Full Spectrum of Tone

Le Bass comes with two distinct channels and a Fusion circuit. Channel A is a nice clean channel, giving you plenty of tone options and a clean, crisp sound that's highly responsive to any play style. Channel B is a bit grittier, with plenty of punch and the option of ramping up a sweet tube break up sound for when you want things to get really dirty. Then you have the Fusion circuit, which lets you switch between Cold Fusion and Hot Fusion. Cold Fusion gives you the best of both channels, letting you run both clean and dirty sounds simultaneously for bags of boost but without losing your tone. Hot Fusion on the other hand takes the dirt and makes it dirtier, giving you everything from a crisp and focused distortion to animal-like bass synth growls.

Of course, that's just the Pre-amp basics of this incredible foot pedal. The Two Notes Le Bass has many more things to offer than being merely another pedal on your pedal board. This pedal can be utilised effectively in the following ways:

This premium-quality preamp pedal is not only powerful enough to muscle its way on to your pedalboard, it's also constructed with a sturdy, robust and compact design, looks stylish, and is fairly reasonably priced in comparison with market competitors. Not only that, but the unqie True High Voltage Design of this pedal means that it runs internally at 200 volts, meaning that it works in perfect harmony with your other pedals whilst preserving the interaction between you and your guitar. 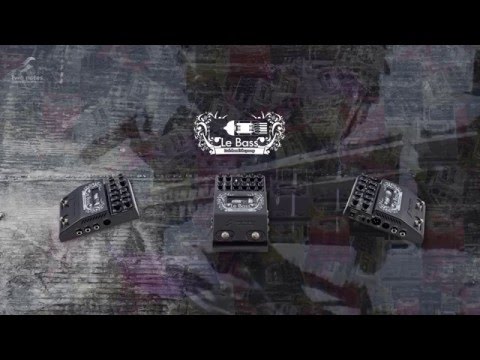