Get Schwifty with Rick and Morty!

Stepping into the role of a mad scientist and delivering something that would make even Rick Sanchez proud, Emmy award-winning Rick and Morty producer, Justin Roiland, has entered a rather special relationship with Teenage Engineering.

Much like a certain schoolboy and grandfather duo, this pairing might seem ridiculous but the incredible creation they've come up with speaks for itself and you're invited along on this whacky adventure.

The Teenage Engineering PO-137 Rick and Morty Pocket Operator vocal synthesizer has a built-in microphone for eight different voice character sampling options, and all of them are voiced by Justin Roiland himself!

Featuring voice samples from Justin Roiland, co-creator of Rick and Morty and voice actor for both (among other characters), the Teenage Engineering PO-137 is the real deal.

You can record your vocals with the built-in microphone then mix, mash and shape them up with Rick and Morty voice sample options and other settings for a completely unique vocal performance with everyone's favourite grandfather/grandson duo leading the way.

Great Features for Music and More

As you would expect from a Teenage Engineering Pocket Operator, the Rick and Morty PO-137 has a number of great features for you to create awesome music with.

There's 120 seconds of sample memory built-in so you've got plenty of time and space to create and record a number of samples to perform with.

An integrated sequencer forms the foundation of your musical creations while easy-access buttons allow you to input everything you need in no-time, including pattern, bpm, FX options and your eight different voice character selections (voiced by Justin Roiland).

You can transpose and change the scale, lock your parameters and more.

In addition to these and other great music creating features built into the Teenage Engineering PO-137 vocal synth, you've got a few other things that make life just a little easier.

Thanks to the PO-137's built-in folding stand, you won't have to hold the Rick and Morty vocal synth while you make music, freeing up your hand to do... other stuff.

There's also a clock and alarm clock function in the Rick and Morty PO-137, so you'll never miss class again no matter what zany adventure you go on together.

You can power the Teenage Engineering PO-137 Rick and Morty Pocket Operator with just two measly little AAA batteries and you'll get a huge 1 month battery life out of it and 2 years of standby time!

With it being strictly limited edition and the internet already abuzz having heard about its existence, the Rick and Morty synth is going to sell out faster than you can say "wubba lubba dub dub!"

Buy the Teenage Engineering PO-137 Rick and Morty Pocket Operator vocal synthesizer from PMT Online now to avoid the crushing disappointment of missing out that may or may not stay with you forever. 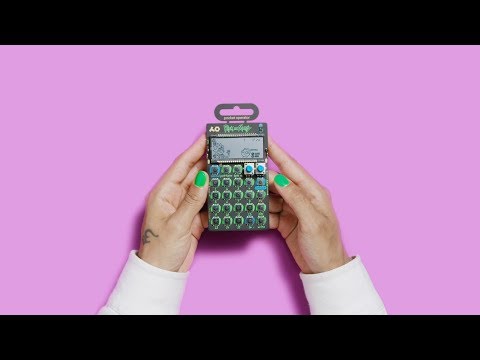