Are you looking for a high quality, reasonably-priced audio interface capable of recording a full band, including multi-channeled drums? Then take a look at this Presonus Studio 1824c USB Audio Interface - with 18 simultaneous recordable inputs, including 8 XMAX Class A mic preamps, what more could you want?

The Presonus Studio Series of USB Interfaces were created to offer a portable, affordable, ultra-high-def recording solution to aspiring producers. With the Presonus Studio 1824c you get the flagship model from this awesome lineup.

Records Up To 18 Simultaneous Inputs

In addition to the 8XMAX Class A Mic preamps, the Presonus Studio 1824c also comes equipped with 8 ADAT Optical I/O (four channels of which run at 96kHz) and Stereo S/PDIF I/O.

Furthermore you get 20 high quality outputs, with flexible routing and zero-latency DSP-based monitor mixing. All of this can be controlled and monitored via the included Studio One Artist music production software, as well as UC Surafce Control software.

Whether your system of choice utilises macOS, Windows, iPad, or Android operating systems, Studio One Artist will be compatible. This software allows you to compose, record, and produce with relative ease, and compared to similar software packages it's fairly straightforward to familiarise yourself with.

Looking for a new loop or sample for your latest masterpiece? With Studio One you can shop, audition, and purchase new content without ever having to leave your desk. In addition to this, you can also purchase powerful extension for Studio on, such as the CRC-1 Control Shaper and Presence XT Editor.

As stated above, Studio One Artist comes for free when you purchase your Presonus Studio 1824c. 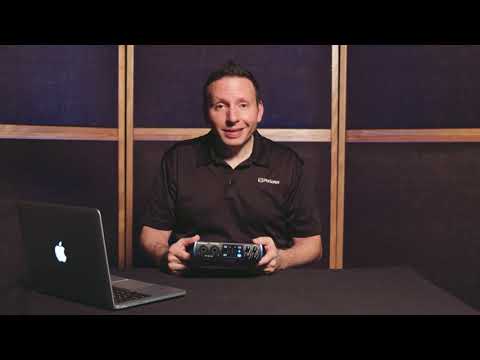