Marshall JTM45 2245 – the rebirth of an unmistakable classic, bringing that sought after tone back to the guitarists who have searched for so long.

Rebirth of A Classic

Back in 1962, Marshall made their first guitar amp; the JTM45. It was hugely popular and defined a new generation of amps and guitar players.

In the decades since its original introduction back in 1962, guitar players and amp enthusiasts the world over have attempted to track down rare original Marshall JTM45 amps from the 1960s to get that awesome sound.

Through meticulous research, engineering and a commitment to perfection, Marshall have created this painstakingly accurate re-issue of the beloved JTM45 amp.

With GZ34 rectification being key to that classic JTM45 sound, it was essential to Marshall that they recreate this technology to perfectly bring back that classic tone.

Having the rectifier interacting with the other valves causing subtle harmonic shifts beneath every note you get that unmistakable Marshall sound that many have attempted to imitate but none have surpassed.

30 Watts of All Valve Power

Delivering 30 Watts of pure valve power, the Marshall JTM45 2245 offers a performance that’s suited from small to large venues and has a beautiful, professional output that’s perfect for the studio.

Combine this awesome Marshall amp head with a suitable cab such as the 1960AHW 4x12 cabinet and enjoy a full tilt blues and rock experience.

The Marshall JTM45 2245 30 Watt amp head is your opportunity to own a perfect recreation of one of the most beloved and sought after classic amps of all time.

30 Watts of pure valve amp power give you what you need to produce those fantastic tones and light up stages from small to large and lay down some fantastic tracks in the studio.

Great for blues, classic rock, jazz and hard rock – if you want a classic sound with all that Marshall flavour then the JTM45 2245 is the perfect guitar amp head for you. 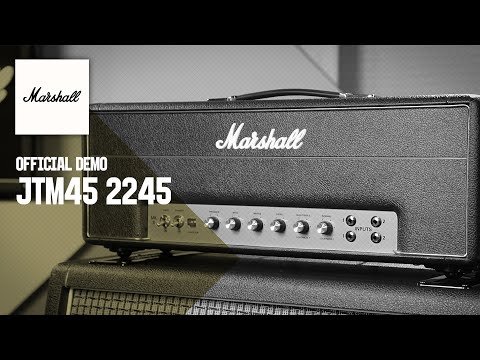