The Green Russian Big Muff is back by popular demand, returning in all its fuzzy glory with its signature distortion and sustain capabilities.

Highly collectible and particularly hard to find, the Russian Sovtek Big Muff goes for high prices on the secondary market and it's safe to say that it has reached legendary status.

Now, Electro-Harmonix are treating us to the Green Russian Big Muff's triumphant return, bringing us the great, thick sound of the original but in smaller, more pedal board friendly package.

Revered by bassists and guitarists alike, if the Russian Big Muff fuzz pedal was to make a return, it had to be done properly and so Electro-Harmonix have gone all out to ensure you get a truly authentic reissue of the legendary Green Russian Big Muff Pi.

The original sound that made the Russian Muff pedal such a hit and favoured by Dan Auerbach of The Black Keys among many other great musicians has been painstakingly recreated to give you that distinctive Russian Muff experience without having to trawl through to the secondary market and pay over the odds.

Of course, another great aspect of the Russian Sovtek Big Muff that really upped the "cool factor" was its military green metal chassis and so, with this new reissue of the

The sustain knob allows to you adjust the amount of sustain and distortion you have in your sound, taking you from some light fuzz to a full-on distorted beast.

Using the tone knob you can really sculpt your sonic attack, going from deep, rumbling bass to some sky-high treble. By turning the knob clockwise, you increase the treble while rolling off the bass and vice versa.

Furthermore, the Green Russian Big Muff Pi is true bypass to retain signal integrity with pure, uncoloured sound. Stomp down on the footswitch to activate the effect and the LED will light up to let you know it is on, stomp again and the light goes off, indicating that you are in true bypass mode.

Just like the original Russian Big Muff, the reissue comes in an absolutely solid and secure metal chassis. It is seriously built like a tank and perfect for taking on tour as it'll withstand all the rigours of life on the road.

Built smaller than the original but retaining that original big muff sound, the incredibly thick fuzzy, distorted tone of the Russian Big Muff defies its new-found smaller home. Also, it can be powered by 9V battery or you can connect a 9VDC AC adapter s you've got a few options there for portability. 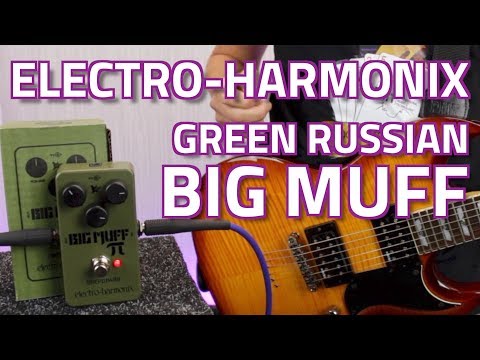