Two Incredible Overdrive Pedals in One

Marking the first time that Boss has ever worked with another pedal developer, the Angry Driver JB-2 sees a unique collaboration between Boss and JHS Pedals.

Bringing together these two fantastic pedals, the JB-2 Angry Driver is possibly the most versatile overdrive pedal that Boss have ever produced.

Thanks to the circuitry inherited from the Boss BD-2 Blues Driver, the JB-2 Angry Driver gives you a really nice bluesy overdrive that’s great for pushing valve amps, while the JHS Angry Charlie side of the family gives it some extremely high gain tones.

You can use either of the circuits independently or combine the two, with the JB-2 cable of giving you a bit of boost to some full on, all out distortion.

All of which come in the form of dual concentric knobs so you get a huge amount of sonic potential at your fingertips.

Versatility is at the core of the JB-2’s design, so you can enjoy all types of overdrive sounds, taking you from just a little gain to some really soaring high levels, all with low noise performance.

So that you can seamlessly integrate the JB-2 Angry with your rig and style of playing, it comes with six different modes for you to choose from:

With this mode, you can turn the JB-2 on or off with the standard pedal, engaging the Angry Charlie circuitry while adding a remote switch allows you to switch between the Angry Charlie and Blues Driver circuits.

With this mode, you can turn the JB-2 on or off with the standard pedal, engaging the BD-2 circuitry while adding a remote switch allows you to switch between the Angry Charlie and Blues Driver circuits.

This mode runs the Angry Charlie into the Blues Driver circuit with the standard footswitch turning the unit on and off while adding a remote switch allows you to select between SERIES MODE and BD Mode.

This mode runs the Blues Driver into the Angry Charlie circuit with the standard footswitch turning the unit on and off while adding a remote switch allows you to select between SERIES MODE and AC Mode.

An LED light at the top of the unit allows you to see at a glance which circuit you’re running; blue for Boss, red for JHS and white for when you’re running both circuits together.

With all the in-built controls, along with the six modes which are multiplied when you add in a remote switch, the Boss JB-S Angry Driver is one of the most versatile drive pedals on the market.

As with all Boss products, the JB-2 is nigh on indestructible with that tough and rugged metal chassis that Boss pedals are famous for making it ideal to take on the road with you.

9v input or battery powered, delivering high quality sound along with legendary Boss build quality – the JB-2 gives you everything that people love about Boss pedals with a great new flavour created through a great collaboration between Boss and JHS Pedals. 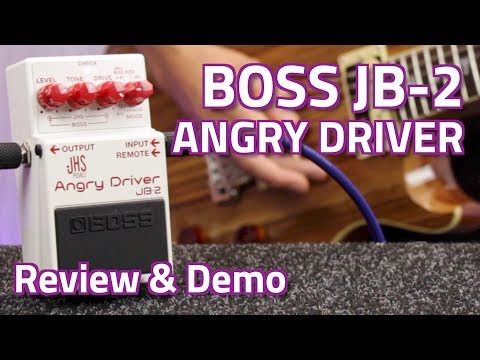