Designed for easy access to controls and connectors, the UR28M’s console comes with a single prominent output volume knob for individually controlling the levels of one of three stereo output pairs or the levels of six outputs simultaneously. You can also select between three monitoring mixes set up in the dspMixFx mixer or Cubase which is routed to the selected outputs. Several smaller rotary knobs to control signal levels of inputs 1 and 2 and the levels of the two headphone outputs, while further dedicated switches for inputs 1 and 2 allow you to employ 48 volt phantom power, 26 dB signal attenuation and connecting high-impedance instruments. Other controls include the Dim button for attenuating all line output signals by 20 dB, the Mono button and the Mute button for muting the selected output signal.

The UR28M represents a top-notch recording system with plenty of inputs and outputs to connect to microphones, instruments, studio monitors and headphones. There’s a USB connector to hook up to either your Mac or PC that lets you record and mix your productions with the included Cubase AI workstation or other audio software. And with the free update to version 2, the UR28M also works with the iPad (2 or later) through Apple’s iPad Camera Connection Kit allowing you to record up to four input channels in an iOS audio application, such as Steinberg’s Cubasis.

The UR28M is a recording and production solution for project studios prioritizing excellent sound and a swift workflow. Connections required for studios such as S/PDIF and routable TRS I/Os are at hand. Also on board are EQ and compression tools in the form of the Sweet Spot Morphing Channel Strips on each channel, not to forget the REV-X plug-in that provides quality reverb for modifying the intricacy of a sonic space and the Guitar Amp Classics effects for studio-grade guitar tracks. The UR28M allows for up to 5.1 surround with its six line outputs.

Need a portable solution for when you're on the move? The UR28M interface is ideal for rehearsal rooms. Thanks to its practical size you can place it anywhere and even take it home with you. With analog and digital inputs over six channels plus acclaimed D-PRE mic preamps, UR28M provides everything you need to record your band in pristine audio quality. Record instruments and vocals in the rehearsal room and mix them later on at home or in the studio in Cubase AI or your preferred DAW

With the latest firmware updates, the UR28M introduces iPad connectivity and the free dspMixFx app alongside some other new features. Together with the UR824, the dspMixFx app allows you to utilize the benefits of Yamaha’s custom-designed SSP2 DSP chip directly on your iPad. The dspMixFx app provides latency-free monitoring while running the highly acclaimed REV-X reverb, the Sweet Spot Morphing Channel Strip and Guitar Amp Classics with other iOS audio apps. With the latest update of dspMixFx you can also connect to Apple’s iPhone. 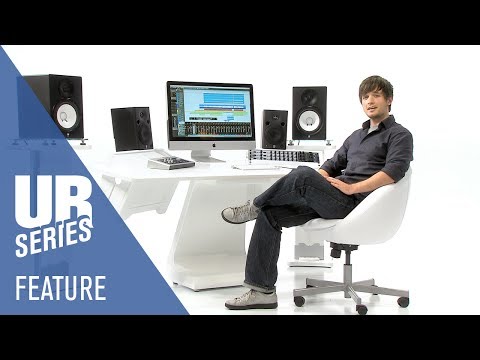