The PRS SE Custom 24, seen here in a left-handed model with a classic Tobacco Sunburst finish, makes a stylish return. Giving you a more affordable take on the PRS Custom 24, the SE Custom 24 is a fantastic guitar with true PRS style and quality.

Extremely versatile and heaps of PRS style in a great quality yet affordable instrument – the PRS SE Custom 24 ticks a lot of boxes.

Great for anyone from touring professionals, gigging musicians or those new to guitar, with roadworthy durability, a wide range of tones while being addictive to play, the PRS SE Custom 24 is a real workhorse guitar that will serve you will in any scenario.

The body of the left handed SE Custom 24 has been made using a Mahogany back and a Maple top with a Maple veneer which beautifully shows off the wood grain beneath the Tobacco Sunburst finish.

Attached to the body is a Maple neck with an extremely playable wide thin neck shape.

It features a 25” scale length while the Rosewood fretboard sports the iconic PRS Birds design inlays.

Nickel hardware has been used, with PRS SE tuners at the distinctively shaped headstock, offering fast and secure tuning of your strings.

On the body of the PRS SE Custom 24 is a PRS patented tremolo bridge which allows for great whammy action for the most expressive performances.

Delivering good output with nicely balanced tone, these humbuckers are coil-tap enabled via the push-pull tone control knob, increasing your sonic options with this great guitar.

A three-way blade switch allows you to select how you want to use your pickups be that either of the pickups individually or a combination of the two.

Allowing for further sculpting of your sound is a push-pull tone control and a volume knob so you can adjust the level of your overall output.

Designed to work well in any scenario, the PRS SE Custom 24 is a modern classic and provides great performance at an affordable price.

There’s a reason Paul Reed Smith guitars are so well loved and the Custom 24 model is a true icon for the brand.

Buy the PRS SE Custom 24 today and get classic PRS Custom 24 visual style in your arsenal along with great, versatile tone and awesome playability. 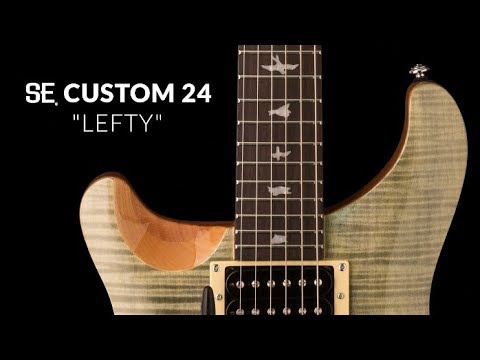