Visually striking in this Kindred Burst finish, it looks, feels and sounds as faithful to the original 1959 Les Paul Standard as you can get.

Return of A Legend

The Gibson Les Paul is an icon of popular culture, synonymous with rock music and as famous as many of the legendary guitarists that have performed with it.

In particular, the 1959 Les Paul Standard commands an amazing level of respect and admiration.

While not performing as well as expected upon its initial release with only 650 being made, it went on to become a legend.

Not incredibly successful on its initial release only 650 were made. In 1964, however, none other than Keith Richards of The Rolling Stones began to wield this now legendary axe.

Richards was soon followed by Mike Bloomfield who picked up a 1959 Les Paul Standard of his own.

The Gibson Les Paul Standard went on to become the "standard" electric guitar for rock music being played by such legendary guitarists as Eric Clapton, Jimmy Page, Joe Perry and many, many more.

Now, the Gibson Custom Shop give you the rare opportunity to own one yourself with this amazing 60th Anniversary 1959 Les Paul Standard.

Through the Custom Shop team's passion for electric guitars and dedicated attention to detail, the original 1959 Les Paul Standard is back in the most authentic recreation of the storied guitar ever made.

The single cutaway shape not only looks incredible but allows for easy access to the upper frets for unencumbered guitar solos.

The body is made with a lightweight Mahogany back and a two piece Figured Maple top.

In keeping with the original specs of the guitar, this 1959 Les Paul Standard 60th anniversary guitar has no weight relief and gives you the authentic playing feel enjoyed by legends of rock music history.

Continuing the commitment to authenticity, the body features a hide glue fit and boasts Royalite binding.

This combination of woods also ensures the fantastic performance and great looks you'd expect from such a sought after electric guitar.

Enjoyed by some of the greatest musicians of all time, this guitar features the same Mahogany, authentic '59 medium C-shape neck found on the original.

A traditional Rosewood fretboard has been fitted with hide glue and gives you 22 frets to perform with.

On the body of the 60th Anniversary 1959 Les Paul Standard is a no-wire ABR-1 bridge and a lightweight aluminium stop bar.

This deluxe set of tuners give you superbly precise and secure tuning along with era-accurate aesthetics.

Painstakingly designed and built, these humbuckers really capture the true essence of the '59 Les Paul Standard, right down to them being unpotted for that gritty, old-school performance.

Using the pickup selector switch you can move between using both pickups at once or either one individually.

Each pickup has its own, dedicated volume and tone controls for easy sound shaping.

Best Ever Representation of the 1959 Les Paul Standard

The Gibson Custom Shop have gone all out in this recreation of the 59 Les Paul Standard.

From laser scanning dimensions to chemically recreating plastics and meticulously colour matching this is the most authentic reproduction of a 1959 Les Paul Standard.

Furthermore, a reissued 5-latch Lifton guitar case comes with the 60th Anniversary 1959 Les Paul Standard. This incredible case features a brown exterior with lush pink exterior and is the perfect place to protect your guitar at home or on tour while continuing the commitment to era-accuracy.

In nearly three decades of Gibson Custom Shop Historic Reissues, this the best representation of the 1959 Les Paul Standard ever made. 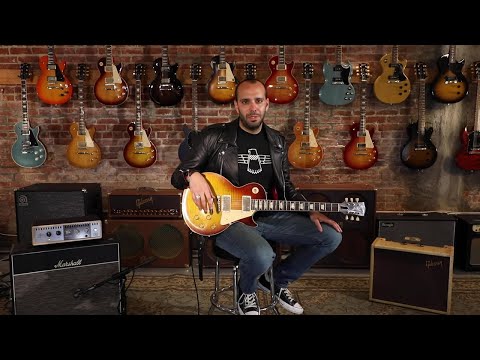