Get the classic Jimi Hendrix fuzz sound with this amazing recreation of that legendary tone.

In this new pedal, you'll find a switch to toggle between Hendrix's famous octave-up sound and that aggressive silicon saturated sound.

Not only does this Octavio Fuzz pedal gives you authentic Jimi Hendrix fuzz sound, it has a suitably psychedelic new look.

Your Choice of Fuzz

This mini pedal is pretty much two effects in one pedal with awesome sounds that complement each other perfectly while maintaining that authentic Jimi Hendrix tone.

An octave switch at the top of this mini fuzz pedal allows you to use the octave-up sound made famous by Hendrix.

Press the switch to shift over to a fantastic, silicon saturated sound.

When you've got the octave-up setting selected, a red LED will light up to let you know you've selected that wailing octave sound.

Stomp on the footswitch to activate the effect and a white status LED will light up.

With the effect off, your signal will benefit from true bypass.

You can also shape your sound to your exact liking with a Fuzz control. By turning the fuzz knob clockwise you increase fuzz intensity and decrease it when turning the knob clockwise. A volume knob is also on hand for setting the overall volume of the effect.

Hendrix On Your Pedalboard

What's more, it's all built into a pedal-board friendly mini pedal that boasts striking new artwork by ILOVEDUST that captures the vibe of Hendrix's music and the era that he commanded. 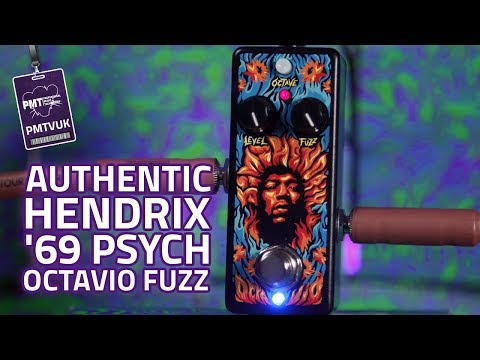