The HT Stage 60 guitar amp's selected duet of EL34s deliver 60W of glorious valve power through two high quality Celestion speakers, making for a combo that will deliver every night, even in the most testing live environment. The 'boutique' style clean channel is extremely versatile with two modes - 'British Class-A' and 'dynamic US'. Each of the two ISF equipped overdrive channels allows a further two modes.

The Clean Channel has two modes, ‘boutique’ and ‘modern’ and its own Bass and Treble tone controls providing the widest possible range of clean tones. The Voice switch reconfigures both the preamplifier voicing and gain structure, and also the power amplifier damping to reproduce either ringing Class A performance in the ‘boutique’ mode, or very clean and tight Class AB tones in the ‘modern’ setting.

The HT Stage has two overdrive channels which share a common EQ section and like the Clean Channel, each of the overdrive channels has a Voice switch which allows the character of each channel to be changed, providing a broad palette of overdriven tones.

The reverb control sets the overall level of the reverb effect. With the control fully counter clockwise there will be no reverb. Turning the control clockwise will increase the amount of reverb.

The ISF control works in conjunction with the Tone control. It allows you to choose the exact tone signature you prefer. Fully CCW is a more American characteristic with a tight bottom end and more aggressive middle, and fully CW is a British characteristic which is more ‘woody’ and less aggressive.

The Blackstar emulated output design is a new benchmark for pro direct recording. This no-compromise design makes it easy to get your tone to disk and tape. You can also use it to run a line out to a PA.

The amp features an effects loop to allow you to connect effects pedals or other professional equipment using the return and send connections. The Effects Loop Level switch sets the effects loop to either +4dBV/-10dBV, which enables you to use it with either professional equipment (+4dBV setting), or with guitar level effects such as effects pedals (-10dBV setting). 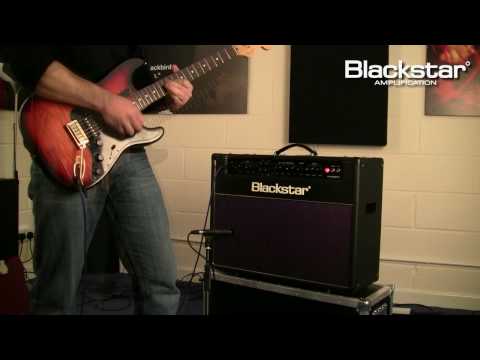